Melbourne is often called as the world’s most livable city…
There are many reasons for that: Friendly people, busy and bustling markets, modern amenities, world class infrastructure, great restaurants, bars, coffee shops, lots of entertainment options and yes… fishing. 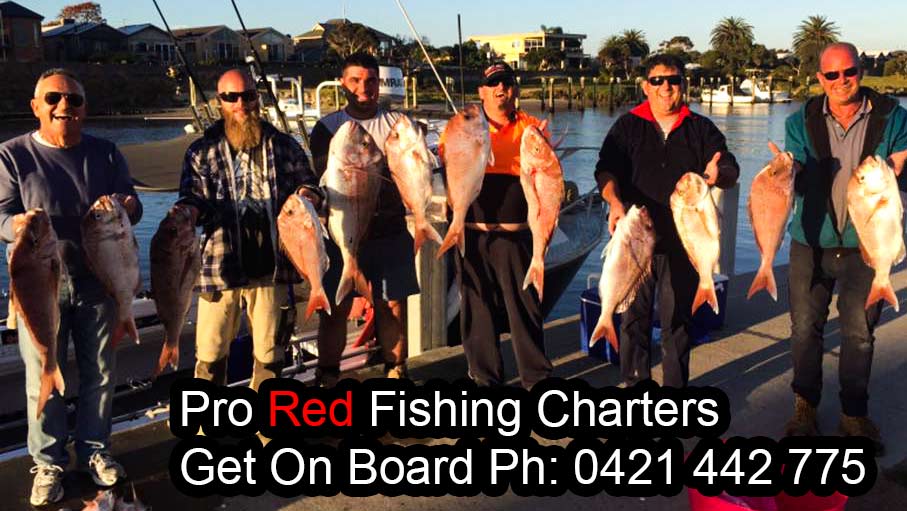 fishing in Melbourne Millions of foreign tourists come to Melbourne every year – people from Japan, China, Korea, Vietnam, India, the United States, UK and many other countries. They are pretty excited about their visit and want to experience everything that Melbourne and the state of Victoria has to offer.
And that means going out fishing in the deep Australian waters and catching Snapper, Squid, Melbourne Kingfish, Gummy Shark, 7 Gil Shark, School Shark, Elephant Shark, Flathead and other fishes.
Fishing is a very Australian thing to do. Most people in Australia have at least some interest in fishing, whether as professional fishermen or recreational fishers. Anglers in Australia belong to every age group between 18 and 70, men, women and children, and vary from experienced pros to complete newbies.

Hiring a Fishing Charter in Melbourne

Pro Red Fishing Charters is one of the most popular fishing charter services in Melbourne which serves both locals and foreign tourists. It is run by Skipper Jayson Turner, who has more than 40 years of experience in the fishing industry and is a highly respected Melbourne fishing charter operator.
Skipper Jayson Turner will take you out fishing on his 25 foot Savage Plate vessel, which is powered by a 135 hp twin Honda four-stroke engine and is equipped with a state-of-the-art Fishfinder, GPS and Radar.
Pro Red Fishing operates Melbourne Fishing Charters for groups of 6 to 8 people. If it’s a particularly large group of, say, 18 to 20 people, they are happy to arrange for a second vessel for you, as long as you inform them in advance.
Fishing is always fun, but nothing is more important than your safety when out there in the waters. Pro Red Fishing Charters makes sure that only the highest quality safety gear are kept onboard and all the safety requirements are followed to the letter.

They provide you with top-rated fishing equipment such as Snapper and Gummy Shark Rods and Reels, Penn Reels for Whiting and Squids, Shimano Ugly Stick Rods, Shimano Nano Rods and more.
While the Snapper is everybody’s favourite catch, you will also catch a variety of other fishes such as the Squid, Gummy Shark, 7 Gil Shark, School Shark, Elephant Shark, Flathead, Melbourne Kingfish, and more.
Skipper Jason Turner of the Pro Red Fishing Charters runs his business with pride and is happy to take anyone fishing out at Port Phillip Bay in Melbourne. Even if you know absolutely nothing about fishing and have never fished before, you are welcome onboard. Let’s go catch a Snapper!
Call 0421 442 775 to book a fishing charter in Melbourne with Pro Red Fishing Charters.