King George Whiting have always been present in Northern Tasmania but over the last 15 years a massive explosion of them has occurred in our estuaries and inshore waters. We really have a substantial fishery of these fish now whereas years back they were a bit of a rarity. Tasmania now also boasts some of the biggest King George Whiting in the Nation with 50 plus fish reasonably common and fish as big as 60 plus centimetres a reality for Tasmanian anglers. 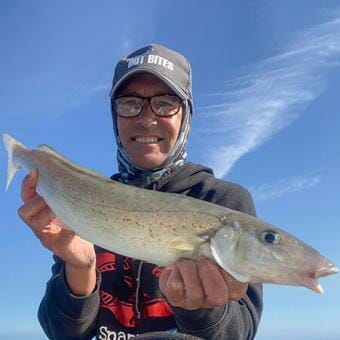 About five years back I moved from home on the shore of my beloved Tamar River Estuary to the seaside village of Bridport. I am no stranger to fishing at Bridport, I have spent the last 3 decades chasing big snapper there but my fishing was limited to that when I went there. Moving there gave me the opportunity not only to target more on big Reds in the area but also to target Sea Trout, Bream and of course King George Whiting. After sourcing some local knowledge from recreational divers in the area I had a fair idea where to start look for the big Ting. I had caught plenty in the Tamar but not out of Bridport so I was pretty excited about a new challenge.

The 2019 snapper season at Bridport was the best Snapper season I have ever seen, both in numbers and some really nice fish turning up to 8.5 kg. I had also recently been able to try some out Reedy’s Rigs Snapper Ultra Rig and 187 suicide hooks on some of the local Reds. I was very impressed with the rigs and hooks, they are super sharp, very strong and the points last a very long period. Brett Reed of Reedy’s Rigs also sent me over some of the Tinganoster Whiting Rigs and wide gap hooks to try on the local Whiting.

One day I gave the Snapper a break and decided to have a crack at the local whiting at Bridport. It was a lovely December Day so I headed to the local seagrass beds along the coast from Bridport. I had caught some fresh squid on the way. I anchored up in a place we had seen the whiting the week before while snorkelling in the area. My young son Sam was swimming on a super hot day while we were out fishing and saw some Monster Ting in this area.

I baited up my Tinganoster and cast in. It was a bit quiet after the first fifteen minutes so I moved up shore to the next sand hole to try. I was fishing in about 4 meters of water. I waited another ten minutes.  I started to get a sharp fast bite which certainly looked like the right species. The rod buckled over and I was on to my first Bridport KGW. By the way the fish was playing up, I knew I had a larger model on as well!  After a few short runs the big whiting gave up and lay on the surface waiting to be netted. I scooped him up with my snapper net and found that I had caught the biggest King George Whiting I have ever seen. I was very excited, first trip and I had caught a beast which was far bigger than all the Whiting I had caught in the Tamar. I ran the measuring tape over him and he went 55 cm.

Soon after that my second rod went off with a familiar bite. Another Whiting and another good one too ! He started screaming off line of my little reel. I finally got him close enough to net. Another beautiful KGW at 54 cm. The bite started getting a bit ridiculous. Whiting were coming in every few minutes into my boat up to 57 cm. They finally moved on and I bagged out with 5 Whiting (which is the bag limit in Tasmania) over 52cm and up to 57 cm, a pretty impressive haul if I do say myself.

Another memorable trip I had on the Whiting was in September 2020 season. The Fishing Show Hook line and Sinker Fishing Television Show asked me to take them out to try to do a show on Northeast Tasmanian Whiting. During recent weeks before they asked me the fishing had been very good but I am never confident trying to catch a target fish under pressure. The presenters Andrew Hart , Nick Duigan and myself headed out bright and early from Bridport in search of a monster King George Whiting. We anchored up in a likely sand hole which had been producing some good fish during recent trips. We baited up with fresh calamari which I had caught the day before and cast our rods  into the beautiful clear ocean water. It did not take long before I started getting a sharp familiar bite. “A Whiting!” I shouted excitedly! I hooked the fish while Andrew started filming. After the short fight, a stonker of a KGW came into sight. I gently led him to the landing net that Nick held.  He scooped him up and we all burst into a cheer. The pressure of catching a big Whiting on film was off. We had done it! We measured the fish and he went a whopping 57cm.After the first catch a hot bite started up with stonker whiting coming into the boat every few minutes. They measured between 50 and 57 cm. The show was a total success.  All the boxes where ticked. The whiting were all  taken on Reedy’s Tinganoster rigs with the wide gap hooks in them. I really like the wide gaps. I think is probably the best hook style for the bigger fish and bigger baits.

If you would like to view some red hot Tasmanian Whiting Fishing have a look at my Fishing Channel on YouTube and check out Northeast Tasmanian Mega Whiting.King George Whiting are definitely one of my favourite fish to catch and eat and are well worth the time and effort of chasing them. I hope this little article has helped encourage you to get the boat out and go and catch a feed of the best eating fish around.Tight lines Damon Sherriff.

Below is a Few video that may be helpful for new anglers .Left Video 1 Whiting fishing Same technique Are used around Australia if you watch this video you can get the feel for how we catch KGWMiddle Video Show How to Fillet a Whiting.3 Below Right Video few tips on rods

How To Fillet a Snapper | Beginners guide

How to Catch Snapper In Port Phillip bay | Video Series