King George Whiting is the largest whiting species in Australia and is primarily located in the southern region of the country. King George Whiting is a very robust species of fish as you can catch them using a wide variety of different Bait types, however, some are more effective than others. To maximize the amount of whiting that you catch, you’ll need to understand some important facts about their favorite habitat and where you can find them easily.

Video with a Few Tips In Catching Whiting

Tinganoster Whiting Rig by Reedy’s Rigs. It has two hooks and a UV glowing effect, which makes it easier to see the hooks when you fish at night-time.

King George Whiting fish tend to live in coastal marine habitats located near sand, low-lying reefs, and weeds. Particularly in the Australian environment, KGW likes to nest in sandy habitats during the summer largely however during the winter KGW can be found in large numbers near environments with lots of reefs. King George Whiting are considered to be bottom-feeding fish which means that when attempting to lure them in, you need to look for areas that favor their primary food sources.

Some of the most popular locations to find King George Whiting in Australia include:

All of these locations will give you a prime vantage point in terms of catching KGW regardless of where you may happen to be fishing for them. To optimize the amount of fish that you catch on your trip, you will have to factor in a few key variables. Some of the most important include where you will be fishing from such as from a boat, using bait fishing techniques, and more.

King George Whiting is a very interesting species, there are two primary sides to their habitation, one of them being offshore and another inshore. During their adolescence stage, KGW is raised under the protection of inshore waterways and bays. It’s only once they gain a certain amount of weight that they begin to migrate offshore into other less restricted waters. 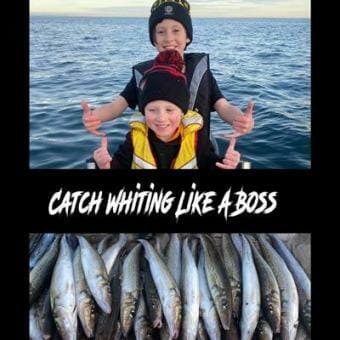 Locating King George Whiting near you

Depending on where you decide to fish for KGW, you will encounter varying environmental factors which impact the quantity and size of fish you encounter. Offshore areas will yield you with very large KGW however they may be small in numbers and volume. If you decide to fish in areas near bays you will encounter large numbers of KGW and you will also be able to access smaller KGW which are great for cooking.

King George Whiting are categorized as being edge feeders which means that they like to fester around for their food primarily in areas such as drains, sand holes, and weed beds. For those that want to take a more land-based approach to their angling, you should try to locate jetties, break walks, or rock ledges to increase your odds of finding premium King George Whiting. King George whiting are specifically known for their ability to adapt and survive in offshore environments such as mud banks.

Aside from finding the right location where KGW is located, you’ll also need to make sure that you’re using the correct lure and bait combination which will attract the fish. Due to the vast number of different climates and habitats that KGW can be found in, the results as they pertain to which bait is best to catch the fish vary.

Creating the optimal KGW rig before going out on the water will save you enormous amounts of time and hassle. King George Whiting love pipis which is why you should pack some on your next fishing trip. Pipis are most effective when used in the process of creating cocktail bait as their soft bodies can expose them to danger when fished on their near reefs. The location that you decide to set up in will play a large role in determining how successful you are at catching King George Whiting.

KGW near reefs tend to respond to flesh bait much more than other types of bait, you need to make sure that your flesh bait is a bloody-flesh species and has an oily body. This will maximize your opportunities to catch KGW in areas with heavy reefs. Silver trevally, Pilchards, and slimy mackerel are all recommended flesh bait types for catching King George Whiting as they have been proven to yield high results.

While this species of fish is known as a food fish, the personality traits of KGW are varying and can be tapped into depending on the method used for catching them. Deepwater whiting can be caught most effectively when using long shark hooks or circle hooks on the end of your rod.

Choosing the correct reel and rod combination for whiting

One positive aspect of catching KGW is that you don’t have to get to in-depth configuring or choosing the right rod and reel combination to catch them. Due to their versatile personality traits and behaviors, you can use your custom fishing setup to catch King George whiting in any depth of waters. An important characteristic to note about KGW is that their bites tend to be very soft and subtle, because of this you will want to make sure that you choose a reel and rod combination that is sensitive and lightweight enough for you to recognize when you’ve got a bite on the end of your line.

Graphite rods in lengths of 7”, 6”, or 8” are optimal and you should outfit it with a sensitive tip that will help aid in the process of your recognizing when a bite occurs on the end of your line. Graphite rods are great because they will allow you to gain optimal catching power whether you’re on a boat or the shore. Once you’ve set up these basic reel configurations, you should consider adding a small-sized 1000-2500 sized reel on the end which will boost your odds of catching King George Whiting in a variety of different waterways and locations.

As it pertains to your leader and line, you will need to configure a specific architecture if you plan on catching any whiting on your trip. For those who are using the bait fishing method, you will want a 6-15lb mainline and your substrate type will determine the overall strength of your chosen leader. When you’re fishing in kelp abundant or rocky terrains, you should only use a leader with a maximum weight of 25lb.

Best bait’s to use for catching King George Whiting

Bait plays a critical role in the proper and effective use of fishing rigs regardless of configuration or type. One of the most commonly used and well-test bait types proven to be highly effective at catching King George Whiting is squid. Squid is used for a variety of reasons primarily because it is known to last on the end of hooks even when there are high volumes of fish feeding on the same line.

Particularly, thin pieces of fresh squid that have been cut are the prime bait selection for catching King George Whiting. Some anglers want a little more excitement when trying to bring their catch out of the water and that’s where customized bait specifically designed to catch KGW comes into play.

One of the most popular KGW specific bait rigs available is the Reedy’s Rigs Tinganoster which has been tested for efficiency in catching King George Whiting. Reedy’s Rigs Tinganoster whiting bait has been tested in the Western Port and Port Phillip for its effectiveness at luring in King George Whiting for the catch. One interesting thing to note about this bait is that it comes in a wide range of different colour combinations in addition to providing up to 10 times more luminous than other bait options.

If you like To Tie your own rigs, these hooks are fantastic for KGW

All of these different configurations make it easy for you to find the perfect bait to catch King George Whiting in various environments. Equipping yourself with the correct form of bait is critically important when catching any type of fish specifically King George Whiting.

Reedy’s Rigs makes it easy for fishers and anglers of all experience levels to begin catching KGW in no time as long as you have enough patience and position yourself in a premium location.

Some other popular bait options for catching King George Whiting are blood worms, sandworms,Bass Yabby, Pipi, Cockle, whitebait, and prawns. Burley can also be used as effective bait when there are no other options available to you, one thing to keep in mind if you decide to use burley for your bait is that it will attract a lot of scavengers which will impede on your bait’s ability to reach the bottom of the waters you’re fishing in.

You want to play with your line once in the water so you can ensure that your bait is still attached. On occasion, whiting may suck your bait in accidentally, when this happens, they will likely soon after spitting it back out which is why you need to have a little bit of extra line to cast back out. Before heading out, it can be useful to check any relevant fishing reports as they will provide you with beneficial information as it relates to the best waters to cast your bait into and where the fish are primarily gathering during the current season.

Your location will play a large part in factoring the most effective fishing method for catching whiting while on your trip. Experimenting with different methods and techniques when one doesn’t work is a great way to find the best fishing technique for you as is pertains to reeling in whiting. By using a bait that was specifically designed for use with King George Whiting, you can increase the odds of you catching a nice amount of fish however you shouldn’t limit yourself.

KGW is a very adaptive species that can thrive in various environments, for maximum results, you should choose your preferred fishing method only once you’ve gotten to the area in which you’ll be fishing. This will allow you to personalize your fishing approach to the specific conditions that you’re facing which will increase the odds of your catching a large amount of KGW.

Getting out on the water

Being that King George Whiting are the largest whiting population in Australia, there are no limits on the locations or areas that you can find a nice pool of this species in. Because of their sensitive nature, you always need to make sure that you’re using a lightweight reel and rob combo so you can always stay alert when they bite your bait of choice. As you can tell by reading through this article, King George Whiting loves bait that is slimy and full of bodily fluids.

These sorts of bait are always a welcomed alternative when finding King George Whiting specific bait is just not an option for you. If you do have access to bait such as the Reedy’s Rigs Tinganoster you will be experiencing fishing nearly on autopilot thanks to the intensive amount of research and testing hours that went into maximizing the effectiveness of bait designed with whiting fishing in mind. While the location is important when fishing for any species, King

Tinganoster Whiting Rig by Reedy’s Rigs. It has two hooks and a UV glowing effect, which makes it easier to see the hooks when you fish at night-time.

Gummy Sharks Can be Caught Year Round. Below is a Video Showing how we Catch [...]

Garfish can be caught in most Parts of Australia!! Catching garfish is a lot of [...]

How to fillet a gummy shark !!! Flake Also Called a Smooth Hound Shark in [...]

How to catch snapper in Autumn

Autumn is a great time to catch snapper. I am Gonging run through some of [...]